Read this post fast and you might just make it to the end before another quarter of a billion emails are sent. 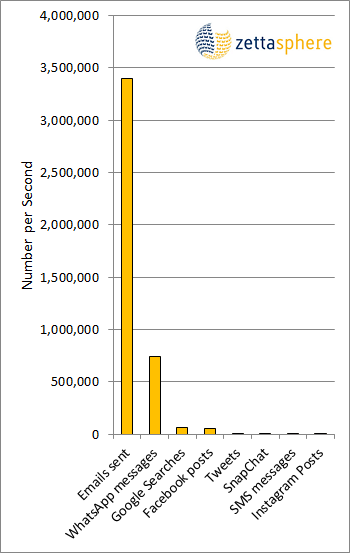 The chart on the left is shown tall and thin because email activity is so dominant it was the only way of getting the bars for most other channels to show up even just a little.

Each bar shows the activity per second, such as number of emails sent per second, or how many WhatsApp messages.

If you’re a numbers person and prefer tabular data the numbers behind the bar chart are in the table below.

The data sources below were used to create the above chart. The articles cited contain more details and stats, in case you wish to find out more about what happens in a second of internet activity.

Stats from BroadbandSearch.net’s handy report provides valuable insights into social network use to help decide which which networks are important to success. Read on for highlights of the report below.

Understand demographics to identify where your audience is and how to reach them.

While 69% of American’s use social media, these numbers vary drastically depending on age. If you have a young audience, they’re almost definitely on these networks, as 88% of those 18-29-year-olds use social sites.

Following this, the older your target audience is, the less likely you’ll be able to reach them. For people over 65 years of age, only 37% use social networks.  Similarly, significantly more college graduates are online, compared to those with a high school diploma or lower.

Of all these users, the majority use social networks every day. This exact statistic does vary depending on the specific platform.
If you have a non-western following, it may also be useful to know which foreign markets have the most potential. Currently, Saudi Arabia and India have the fastest-growing usage of social media.

Once you’ve determined where to find your audience, you need to consider the tone of your campaign. Research has unveiled that certain types of voices are most popular with consumers. Add these qualities to your strategy, and you’re more likely to achieve engagement and return followers.

The top attractive qualities for brands marketing on social media:

A smaller percentage also noted that they liked ‘snarky’ brands. This fact is important, as it’s essential to find the best voice for your audience. Sometimes, changing your tone to contrast the ‘mainstream voice’ will prove more successful than trying to please everyone.

It’s also important to know where people are most receptive. The following channels are those on which users most expect to see adverts:

According to those surveyed, the following practices were most likely to convince consumers to make a purchase on social media.

Facebook is by far the most popular platform and reaches most people (including 97% of those ages 18-34.) Each person spends an average of 1000 minutes a month there. Its biggest rival is YouTube, but as it’s a streaming platform alongside a social network, it’s hard to make a direct comparison.

It’s also possible to narrow down Facebook usage further. In an average month, 63% of people will use the app for 15 of the days, and they’ll check five times per day. These numbers show that consistency of Facebook users. It keeps people coming back, which is an essential factor when trying to grow an audience for your business.

Instagram comes in second in the popularity contest, with over 1 billion users and 500 million active per day. Its image-based nature means that it generates more engagement when it comes to picture posts. In fact, Instagram images see 23 percent more engagement than those on Facebook.

Instagram is also a hotbed for people looking up brands and products. 70 percent of people use the platform to find companies, and 60 percent use it to find out about products. As Instagram ads seamlessly meld into the home feed, it’s a great place to advertise without being overlooked.

While Snapchat isn’t the best choice for brands, it still has its uses – particularly if you’re looking to connect with a younger audience. 60 percent of the platform’s users are under 25, and 70 percent of the 18-24 age bracket in America are signed-up.

While it’s not a premium advertising platform, it can help with brand engagement. Out of all the people who started watching a story made by a brand, a massive 91 percent watched the whole thing.

Snapchat is also one to watch in upcoming years. 47% of teens said they prefer the platform to Facebook. Considering this fact, it’s likely that the most popular social network will change as the population continues to age and grow.

LinkedIn is a professional platform that most use for job hunting. However, it’s also useful as a B2B marketing platform, or to target graduates and young professionals. There are 46 million students and recent college alumni using the social network. Plus, 64% of social referrals to corporate websites come from LinkedIn, so if that parallels your business model, it would be an excellent channel on which to focus.

LinkedIn also provides an audience with more extra disposable income than most social sites. 45 percent of people earning 75k a year use LinkedIn. For a marketer, this translates into considerable spending potential. Many companies often overlook this site as a promotional tool. However, for the right company, it’s a veritable gold mine.

Twitter is another often overlooked platform, though for a good reason. It has struggled with growth and profit, causing many to question its longevity. It’s predicted that Twitter will get 500,000 signups in 2019 – which only counts for a 1% growth.

Similarly, only 24 percent of users are from the US, so if you have an American audience, then it’s probably not a great choice. However, if you enjoy an international following of affluent Millennials (of which 80 percent of Twitter users are), then it might be worth investing your time.