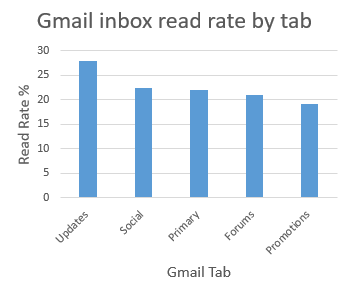 Whilst alarmists might look at the read rate for emails in the Gmail promotion tab of 19.2% and exclaim there is slim chance of your marketing emails to Gmail addresses being read, that is –  well – alarmist.

This latest chart is from RetunPath stats for read rates of emails in each Gmail tab.

But rather than look at that 19.2% in isolation, let’s compare the read rate for emails in the promotions tab to that of the primary tab and performance of emails sent to other ISPs, for a better understanding.

The Gmail primary tab has a read rate of 22%. Which means promotional emails are read only 12% less than the personal 1-1 emails in the primary tab.

It’s often assumed that personal emails are the emails users really want to read. But actually, they aren’t read much more than promotional emails!

The 19.2% read rate of promotional emails is not so much due to them being in the promotions tab but simply because they are slightly less valued than other emails. Regardless of type of email the read rate is only just over 22%. Put another way, other emails are being generally ignored as much as promotions.

Does the promotions tab make emails to Gmail less likely to be read compared to other ISPs?

Some insight is gained from comparing benchmark open rates.

MailChimp average open rate is between 15% and 28%, depending on industry, (January 2017 data) or from IBM benchmarks the overall open rate average is 21.8% (2016 benchmark data)

Whilst these figures are in the same ballpark as 19.2% read rate, the figures can’t be directly compared.

The MailChimp benchmark is made up of largely of emails from small and medium enterprises and the IBM benchmark biased towards enterprise brands.

The 19.2% promotions tab read rate is also based on a sample. ReturnPath take the figure from their consumer network of users who agreed to share this data. This sample may not be truly representative of the full Gmail user population.

Finally read rate and open rate are measured in different ways (see * below).

So whilst exact comparison of these numbers is not sensible, given the figures are of the same magnitude there is no evidence here to suggest the Gmail promotion tab is having a significant negative impact on email marketing.

Still want to land in the primary tab rather than Gmail promotions tab?

There isn’t a guaranteed fix to force delivery of your email into Gmail primary tab inbox rather than the promotions tab.

Individual Gmail users can decide to teach Gmail to put emails from a particular sender into the primary tab rather than promotions tab by simply moving it there.

And any email from an address that is in the users contact list is placed into the primary inbox.

Your best chance of a user adding you to their contact list or moving your emails to the primary tab is by being an email they want.

Performance against other ISPs

To assess Gmail performance for your own email marketing program look at your open rates by ISP. This is the most reliable way to judge Gmail inbox placement against other ISPs.

I regularly review stats by ISP for different brands. I’ve not found any systemic evidence showing emails sent to Gmail are significantly less likely to be read.

If you do see low open rates for Gmail, it’s almost certain the weak performance is due to delivery to junk, not due to promotions tab placement. If you suspect you are delivering to Junk, or being deleted without even making the Junk folder, then read 7 email deliverability issues that put you in junk.

What else should you do?

The open rate is not the ultimate decider of email marketing success, lower open (read) rates can be more successful as this analysis of email frequency shows.

Overall, continue to work at ensuring content provides value to your readers. It’s a win-win strategy. It improves response rate, continues to buy your place in the inbox and as filter algorithms develop and new ‘tab’ like innovations occur you’ll be in the best place for a continued strong email channel.

The read rate is based on Gmail marking the message as “read” due to subscriber activity in the inbox. This is effectively the flag held by Gmail so Gmail knows whether to show a particular email as read or not read. Whereas the open rate is based images being downloaded by the user.