Google are rolling out a Gmail interface change that puts an unsubscribe link directly next to the Senders details in the head of an email, making it much easier for users to unsubscribe (post updated 28th February with unsubscribe by email information).

Here’s an example of how it looks. 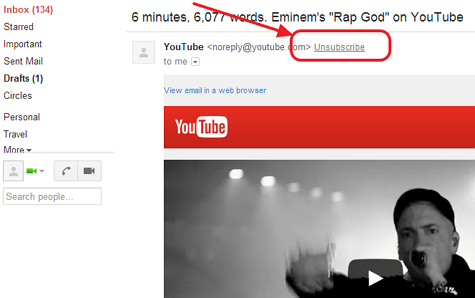 The Unsubscribe link is shown in the header regardless of which Gmail tab the email landed in.

Outlook.com (aka Hotmail) have also for some time been including an extra unsubscribe link, but right at the bottom of an opened email as shown in this example email 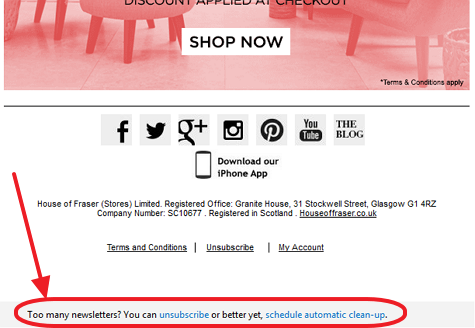 Outlook.com also already adds a link next to the sender. But rather than as Gmail adding unsubscribe link, Outlook.com includes a link for to their clean-up functionality, that moves or deletes multiple emails from the sender.

Why the Gmail change?

Vijay Eranti, head of Google’s anti-abuse team is quoted saying “One of the biggest problems with the Gmail spam filter is identifying unwanted mail or soft spam”. Basically acknowledging that true spam and no longer desired previously opted-in brand emails often get the same treatment from users – the Gmail ‘Report Spam’ button.

The expectation is that providing a method that is easy to use, trusted and consistent across different senders will encourage users to simply unsubscribe from brands they are no longer interested in and keep the spam button for true spam.

This should be good for legitimate senders. As the number of users who report a sender as sending spam is one of the strongest signals the ISPs use to determine inbox placement. Anything that prevents false classification of an email as spam has to be a good thing.

The ability to unsubscribe from emails did previously exist in within the Gmail UI, but was hidden behind a menu. By making it prominent in the user interface it’s likely to get a lot more use.

How does it work?

The Gmail unsubscribe link is based on the information from the senders List-Unsubscribe header (defined in RFC 2369) that many email platforms are able to include in emails. Check with your ESP if you’re not sure if you have them or not.

In our tests the unsubscribe link is not currently showing up for all emails that have a List-Unsubscribe header. We expect it’s just a matter of time for this to happen for all senders that Gmail considers safe.

In our YouTube email example above, clicking the unsubscribe link next to the sender showed a further dialog 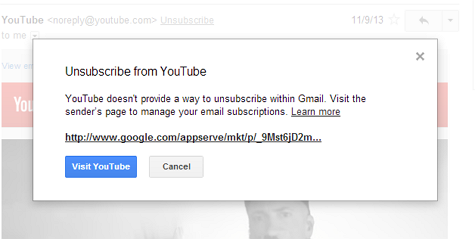 There are two types of unsubscribe method that can be included in the List-Unsubscribe header. Unsubscribe via a link (http command) to a landing page or unsubscribe by email (mailto command). When the sender provides an http link Gmail shows the above dialog to let the users decide whether to go further.

Google Analytics emails have just an http link in the List-Unsubscribe. Clicking the new Gmail added Unsubscribe link shows a dialog like that above and then clicking the button ‘Visit Google Analytics’ takes you to a preference type page so you can select which communications to unsubscribe from. 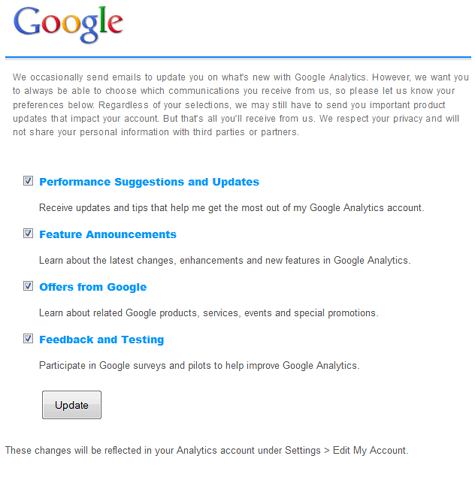 Click the Unsubscribe button in the above dialog and all that Gmail does is quietly send an unsubscribe email request to the Sender, as specified in the List-Unsubscribe header. In fact check your sent items folder and you’ll see the Gmail auto-generated unsubscribe request email.

For any sender with multiple email streams and interest options the question is whether an unsubscribe request should remove people just from just the one list or from all sender communications. Both are problematic, either way it is unclear to the user whether they are to expect; no more emails from the sender or just no more of that particular type of email.

I recommend it is better to use the approach used by Google Analytics and include an http link in the List-Unsubscribe that takes the user to page with unsubscribe options. This provides the best customer clarity as to what they are unsubscribing from.

If your only option is to use a mailto link in the List-Unsubscribe header then consider sending a unsubscribe confirmation email, with details of exactly what they have been unsubscribed from, how to re-subscribe and other subscription options. CAN-SPAM and other laws normally allow a short period for unsubscribes to be actioned, so as long as the confirmation is sent within this period it should remain legal. Its 10 days for CAN-SPAM.

What else have Gmail planned?

At the recent MAAWG conference Google announced they are starting a limited pilot of providing feedback loops. Initially this will be available to selected ESPs and only those that meet Google’s bulk sender guidelines. Google appears to be providing a good incentive for ESPs and Senders to act as Google believes responsible senders should.

Overall this is all good news, in particular that Google is working with legitimate senders in a joint effort to make life better for the people who really count, our customers.

Acknowledgements: My thanks to Andrew Bonar at Email Expert for confirming he’s seeing the same change in Gmail as me.

Ask me a question