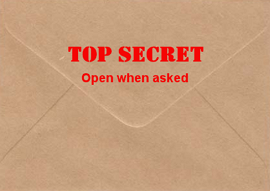 Last week I ran a live psychologically experiment with the audience at On The Edge Digital in Bristol. The results revealed an important trait of the human mind.

Brown envelopes were handed out to members of the 100+ strong audience. They were asked to open their envelope, read the two questions inside and without conferring answer them. I asked that they made their best guess should they not know the exact answer.

Unbeknown to the audience half the envelopes contained these two questions:

Whilst the other half contained a different first question but the same second:

Most people know a little of Ghandi, that he made it into adulthood. Also that nobody has ever lived beyond 140 years. So the first two questions are seemingly irrelevant and stupid questions.

The answer papers were collected and the age answers averaged for the two groups.

Those in the first group answered with the average age Ghandi died of 49 whilst those in the second had 82. This experiment is based on that in a study from Strack and Mussweiler and echoes the result they reported.

Despite the first question in both cases being nonsensical they impacted how the second question was answered.

This is the effective of anchoring.

Simply by being required to evaluate a low figure in the first question, caused lower guesses to the second question. The figures of 9 and 140 become sub-conscious reference points to further thinking.

Why is this important?

The language used and information in your subject line frames how the rest of your email is read.

The subject line does far more than persuade someone to open your email. It is the start of the script that setups the sequence of thought as they read the rest of the email.

This means subject lines should be created considering the message as a whole and objective of the email in mind, rather than just considering how to get the email opened.

The email body had two central calls to action buttons

Those who saw subject line A were 232% more likely to click the first of the two buttons.

Subject line A prompted the question “Are we still welcome in your inbox?” and before the email was even opened customers started forming an opinion about the answer, yes or no.

This made them more likely to take the top call to action, since they had sub-consciously already answered the question.

Just in case you’re wondering, Ghandi was assassinated at the age of 78.